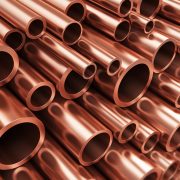 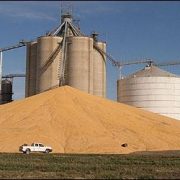 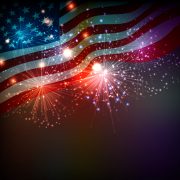 Risk On – Numerous charts show signs of a pending decline

In the markets, as in real life, flags flying at half mast symbolize death. A number of half-mast flags and pennants in the raw material markets indicate that the steep decline in early May was just Act 1 in a two-act play. The flags are symbolic of the intermission between the Act 1 (the first decline) and Act 2 (the next phase of the bear trend).

Bear flags or pennants are present in the following markets:

Crude Oil and Heating Oil display classic pennants. Rallies toward the May 11 high (while not necessary) would be an excellent shorting opportunity. The target of the pennant is Crude Oil is 84.80. The Gold displays chart construction similar to the energy products with two exceptions. First, there is potentially enormous support under the Gold market in the form of a previously completed 4-month continuation inverted H&S pattern. However, old support sometimes has a way of disappearing. Second, the huge volume on May 5 could indicate accumulation buying by strong hands. However, if the energy pennants lead to a strong decline it will be difficult for Gold to hold up in a Risk On/Risk Off market environment. Sugar also displays a classic bear pennant. This market is in a well-established bear trend and has been since early February. Notice that the pennant in the October contract is forming just below the neckline of a 5-month H&S top. The target in October Sugar is 17.83. If my analysis is correct in Soybean Oil, the current pause in the form of a flag should be the last support before a sustained markdown in price. Once this flag gives way, prices should trend to 45.60. (Caveat: The pattern in Bean Oil could prove to be an extremely bullish continuation H&S pattern. Traders need to be flexible on this one.) Additionally, a number of other markets present technically bearish potential. These markets include:

The Russell 2000 is hovering right at the major 8+ month trendline. A violation of this trendline would indicate that the bull trend since March 2009 is seriously aging. The initial target would be 770 as part of the transition from bull market to bear market. A confluence of technical developments can add to the legitimacy of a breakout. There are four factors that could trigger a sell signal in the S&Ps simultaneously by a decline below the May 6 low. First, the 2-month cup and handle bottom would fail; second, the 2-month trendline would be violated; third, the May 2 Ben Laden blow-off would be confirmed; and, finally, the hourly chart symmetrical triangle would be completed. I touched the third rail in late April when I announced that Silver was in the bubble phase. I was tarred and feathered on May 1 when I pronounced the previous week’s volume (7.5 years of global supply) was a strong sign that Silver had topped. The market has found support in the low 30s and a bounce into the low 40s is possible as Silver develops its own half-mast bear pattern. New crop December Corn has traced out a H&S top. It would not be unusual for Corn to top now. The seasonal chart shown indicates a strong tendency for new crop Corn to top in May or June.

Finally, the daily chart of August Soybean Meal displays a very clear possible descending triangle. A close below the recent lows would complete this pattern and establish a target of 300. Adding all things up, the period just ahead could be a tough life for raw materials (and stocks).