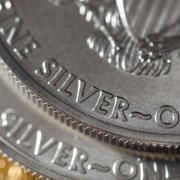 In recent weeks I have presented to members of the Factor Service the possibility that  why The Silver chart is a textbook example of the veracity of classical charting principles. Some of the features on the weekly graph include: